Something we don't talk too much here at Blue Fish is that we do quite a bit of photography. Websites need images to visually represent their brand and communicate an appropriate feel. Several of my friends have emailed me recently asking for advice on what camera to purchase. This being the Christmas season I am betting that a few more folks that we know are going to end up with shiny new cameras under the Christmas Tree. So I figured I would write down some basics for taking your photography knowledge to the next level.

When most people get a new DSLR they are a bit overwhelmed. They know that they now have all of this power but have no idea how to harness it. They set their new shiny toy to Automatic mode and snap away. While this gets you a bit more capability over a point and shoot camera you are really missing the boat if this describes your way of using the camera. Dear Reader, I want you to reach deep down and work hard to understand 3 things: aperture, shutter speed and ISO. I know you can handle it. Stay with me here.

On most DLSR camera lenses if you look at the front of the lens you should see the shutter inside. It looks like a series of blades. Visually it will help you understand aperture and shutter speed if you can visualize this. Aperture, in non-technical terms, tells you how large that shutter can open. The odd thing about aperture that people have difficulty understanding is that as the number goes down the size that the shutter can open gets larger. For instance, if you have a prime lens in the 50mm focal length that has an f-stop of 1.2 it can open much larger than a 50mm lens with an f-stop of 2.8. As a matter of fact the size difference is quite large.

Since photography is all about light (a blog post for another time) being able to open a shutter to a wider diameter means that the lens can let more light in. This will be important in a minute when we discuss how the three of these items are related. If you still have that lens handy take a look at the writing on the front of it. If it is a zoom lens then it will probably say something like 28-105mm 1:3.5 - 5.6. The 28-105mm tells you the focal length. The 1:3.5 - 5.6 tells you it has an f-stop range from 3.5-5.6 depending on where in the focal length you are. So at 28mm it has an aperture of 3.5 and at 105 it has an aperture of 5.6. Both of those apertures are pretty average. Once you start getting into photography you may be looking at zoom lenses with a constant f-stop of 2.8. Or prime lenses with f-stops in the 1.2-1.8 range. But both of those demand that your wallet be really committed to this photography thing.

Alright, if you are still reading then I congratulate you. This is not easy stuff. But it is important to understand. Let's continue with some easier items.

Next up we need to discuss shutter speed. This should be easy. Shutter speed is literally the speed at which the shutter opens and closes. Most lenses have plenty of capability here. In other words the lens that came with your camera will be just as capable as a $2000 L-Series lens from Canon.

ISO really stands for Film Speed. But most of the cameras I've seen recently visually represent this as ISO. Back in the days of film you used to have to know more about film speed but now with Digital not so much. Film speed tells you the sensitivity of film. In film it ranges from 50 to 3,000 ISO (if I remember correctly). With digital it goes from 50 to 102,400! Now I can't imagine taking a picture with my film speed set to 102,400 as the image would start to show a lot of noise. But the image below was taken at iso 10,000 (Canon 5d mkIII with a 70-200 f/2.8). It is starting to get a bit noisy but is still a usable image. Especially when you consider that just a few years ago we couldn't shoot anything over iso 800.

So, we've covered the super confusing aperture and the not so confusing shutter speed and iso. Here comes the important part... they are all related. Three legs on a stool kind of related.

Let's say I am taking a shot and the camera meters the image (we're set on Auto) and tells me that it is set to properly expose the shot at iso 400, f/4 and a shutter speed of 1/200. If I make a decision that I want to set the camera to aperture priority (Av mode) and change the aperture to f/2.8 the shutter speed may need to increase to 1/320 in order to still properly expose the image.

Another example would be if I am shooting at dusk and it is getting dark outside. The camera tells me that it is set to iso 400, f/2.8 and a 1 second shutter speed. Well a 1 second shutter speed is not going to work. No one has a hand that steady. So you need to adjust the settings to get the shutter speed to 1/100th. But your camera does not have an aperture that can go any larger than 2.8. Well, then your only option is to increase the sensitivity of the camera. You would change the iso incrementally till you are in a better range for shutter speed.

I used to just set my camera to auto. All of these things were confusing to me too. But once I realized the relationship between these settings and why I might need to know how to utilize them it opened up a whole new world (cue Disney music). It made it easier to get the picture when the conditions were less than ideal. And now that I have progressed into studio lighting it is imperative that I understand the effect changing one setting has on the other. Hope this was helpful. And keep shooting!

Several months ago we started on a new project. We will be building out a site for Eastern Shore, Alabama. The site will focus on building a... 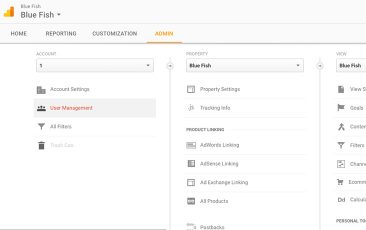 Getting Started with Google Analytics

Last week I wanted to post a blog-post-a-day about SEO but this one is a doozy so it carried over to this week. In today’s post about SEO I ...